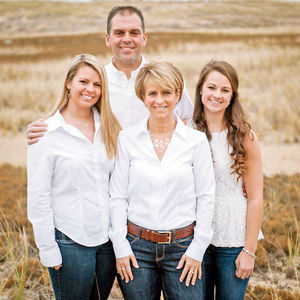 Anthony “Tony” Alonardo, 49, unexpectedly passed away on Wednesday April 22, 2015, creating a gap in the lives of family and friends throughout Wilmington and the communities beyond.

But for the people who loved Tony and who he loved in return, his passing offered a chance to speak on the incredible impact that he had on their lives. Decades of charity and goodwill have forever enshrined Tony in the hearts of innumerable people throughout the town.

“When I met him in the hockey rink, I just wanted to be his friend,” said Tony’s good-pal John Foley. “He was a good guy, smart, and I knew I wanted to work hard and be his friend.”

“I’ve had the privilege of knowing Tony ever since I was seven (years old),” said Lauren Fitch, captain of this year’s Wilmington High School Varsity Girls Hockey team. “He was an amazing coach. He was more than just a coach — he was a friend, a mentor, a role model. He was a positive influence. He did more than just fix the plays, he was a great friend to all of us.”

Alonardo was raised in South Medford and graduated from Malden Catholic High School, North Shore Community College and the Wentworth Institute. He found a home in Wilmington in 1991, and he rapidly became an entrenched and beloved figure around town, especially at the Ristuccia, where Alonardo was a regular as both coach and player.

“We go back to coaching the kids when they were Buzzers,” said Michael Gautreau.

Gautreau called on Tony’s assistance after being hired as the interim coach for the Wilmington High School Girls Varsity Hockey team. As had come to be expected from Tony, he agreed to assist without any hesitation.

“Tony didn’t blink an eye,” Gautreau said. “He said he’d help me out in a heartbeat.”

Throughout what became his final season as a coach, Tony was a steadfast supplier of support and knowledge to every girl on the team.

“Halfway through the season, I was put on forward when I’d played defense my whole entire life,” Fitch recalled. “I looked at Tony and told him, ‘I have no idea what I’m doing.’ He was able to give me confidence and the knowledge of how to be an all-around player and person.”

“Tony was a teacher, and for the older kids he was a mentor,” Foley said.” He knew the game, and he could teach them all aspects of the game. He could talk to the defensemen about why it was important to step up and when they should hold back.”

Along with coaching, Alonardo played in a local men’s league. Beyond the rink, Alonardo was a member of the Knights of Columbus in Wilmington and an active member in St. Dorothy’s Parish. But what he lived for most of all was time with his wife, Donna, and beloved daughters Sara and Michelle.

To his family and to the town which he adopted as his own, Tony Alonardo was a constant source of charity and support, forever answering whatever request for help came to him.

“He’s a guy who put a lot of time in and gave a lot back to the community,” Gautreau said.

“I was really honored to be coached by him this year,” Fitch said. “We were so lucky and grateful that he wanted to be a part of that.”

John Foley referred to Tony not as a friend or as a colleague, but as a brother with whom he could share anything. The feelings of loss at Tony’s sudden passing are incalculable, but Foley wishes to use that tragedy to remind people of the guiding principles through which Tony spread so much good during his time on earth.

“Tony was just a giver, almost to a fault,” Foley said. “He never asked for anything in return, and he never even asked you for anything. But he was always the first to ask what can I do and how can I help.

“That was his whole life. Imagine if this whole world was like that?”

This article originally appeared in the Wilmington Town Crier on May 2, 2015, courtesy of Brendan Foley.